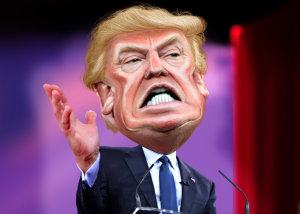 Donald Trump: a great example of how ignorance can warp your perspective of your competence compared to others. Photo courtesy of DonkeyHotey via Flickr. Attribution-ShareAlike 2.0 Generic (CC BY-SA 2.0).

The Dunning-Kruger effect has had a lot of press recently because of Donald Trump. Almost two decades ago, in their very readable paper, Unskilled and Unaware of it: How Difficulties in Recognizing One’s Own Incompetence Lead to Inflated Self-Assessments,  Cornell psychologists Justin Kruger and David Dunning showed that incompetent people lack the ability to gauge their own incompetence if they have even a tiny amount of knowledge in a particular area. (If I need to explain the connection to Trump at this point, we probably shouldn’t get into a political discussion…) For example, explain Dunning and Kruger, “most people have no trouble identifying their inability to translate Slovenian proverbs, reconstruct an 8-cylinder engine, or diagnose acute disseminated encephalomyelitis.” However, if they think they know anything at all about a domain, even the people with the least ability – after objective testing – think they are above average.

Interestingly, the contrary is also true. People who know a lot about a domain assume that everyone knows pretty much what they do and so underestimate their expertise (the consensus effect).

I first heard of the paper from the book, Pragmatic Thinking and Learning: Refactor Your Wetware by Andy Hunt (a very nice book that I recommend to students and to anyone with a tech mindset looking to be more creative and productive). But this morning something clicked and I decided to read the full, original paper. I suddenly realised that many of the problems I’ve been having recently in my work are connected to the concept of people not recognising their ignorance. (Don’t worry, I’ll get to my own ignorance by the end!)

For more than 15 years I’ve been teaching undergraduate engineering students how to write. Every year, a significant minority of these students tell me that writing isn’t important, that the issues I identify as critical aren’t, that they know that their work was worth more than the mark they got, and so forth. Just as predictable, this clamour subsides as the students get older. Ten years later, I have students starting to connect to me on LinkedIn having thought I was an idiot when they were 19, thanking me for the stuff I managed to teach them or (sometimes) saying they wished they’d paid more attention at the time.

Of course, you expect to have to teach the students: my bigger problem is often the rest of the staff. Most researchers seem to think that, because they’ve had a lot of technical papers published, that makes them not only a good writer but a good enough writer to teach the subject. In some cases that is undoubtedly true. However, if you look at the quality of the writing in the vast majority of engineering papers, that’s demonstrably unlikely. If the subject were psychology, engineering researchers (except maybe a few in AI or biomedical engineering) would accept that they have no competence in the domain and would not, therefore, consider they had the expertise to teach the subject. But because they’ve had to write in their careers, that somehow makes them as expert in the subject as someone whose entire career has been devoted to writing. (Yes, that’s me!)

Don’t get me wrong: this is nothing to do with engineers per se. I have the same concerns about people who think that writing about science and technology is the same as writing about anything else. And managers who don’t have the humility to understand that their job is to enable, indeed encourage, their staff to use their specialist expertise to get the job done without being constantly second-guessed and micromanaged. (Add your own examples here).

I am sure the people I worked with in my 20s could come up with some great examples of my own incompetent assessments of my abilities. (I can think of some that make me cringe.) As I’ve got older, I think such episodes have become less frequent. I’m much more circumspect about what I claim to be good at these days and try to let those people with more expertise make decisions that are within their bailiwick. Having read this paper, however, I will be even more cautious about trying to identify blind spots.

As an educator, there is another way to look at this. We all know that it can be difficult to bridge the gap between expert teacher and novice student (that’s why group work and having students teach each other is so important). However, we have to focus on a higher goal than just passing on knowledge: it’s not just about getting the students to learn, its about getting the students to understand that they have something to learn. If they think they already know how to do something, chances are they will pay no attention to what you have to say.

What are my take-aways? Well, in my teaching, I already spend a lot of my teaching time on motivation rather than content. I’m hoping to use the Dunning-Kruger analysis to help me to think about how to do this more clearly. I’m also going to be more realistic about my work ever being appreciated by the majority of my colleagues: it’s just not going to happen. That might sound negative, but it’s actually – sort of – a positive. I can view this lack of appreciation for what it is: a display of ignorance, not animosity.

Originally posted on Brains and Machines.