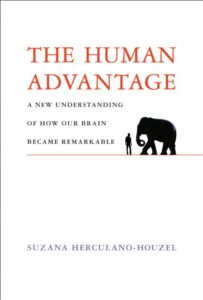 This book was recommended by a colleague who is both a biologist and a neuromorphic engineer, and I was hoping to get from it some insights on how to build a brain. If I hadn’t come to it with this expectation, I think I would have enjoyed it more… because that’s not what it is. It’s the story of how a science writer switched back to being a scientist and and was able to bring a fresh eye to an old subject. Her new perspective, plus years of work and dedication, have led us to a much better understanding of who we are and why.

Essentially, the book seeks to answer some basic questions. First, why are we so much smarter than our great ape counterparts? Second, why are whales and elephants—both of which have giant brains—seemingly not as clever as we are? Finally, is there something “special” about humans?

Herculano-Houzel moves step by step through talking us through a new technique that she developed to count neurons in the brain en masse, through the results of the experiments she did measuring the brains of various creatures, and the new questions they raised. Slowly, step by step, she shows how brains scale in animals, how that scaling is different in primates, and why apes and humans are different from each other. (I won’t spoil the end for you, but I will tell you that the argument that leads to her conclusions was utterly convincing, at least to me).

As a non-biologist myself (my first degree is in physics), I found the book a little bit tough at times. It’s not intellectually challenging, but biologists really like to name things: cells, animals, anatomy, and such. When I lost focus and these terms washed over me, I found I didn’t miss much (I certainly never lost the thread of the argument), and there was usually a clarifying graph on the next page.

On the other hand, I sometimes felt that—for my purposes—the pace was a little on the slow side. Each step of the argument was painstakingly explained, often with graphs that showed very simple relationships (I would have believed her!). I think this may have been because, in some biological circles, the results are/were considered controversial and the author felt she constantly had to justify herself. I respect that, and probably had a deeper learning experience as a result, but at some points it was a little tedious.

The tone changes at the end with an enjoyable run through the evolution of human food and culture. Taking from a number of sources, the author makes an argument that shows how the size of our brain has completely changed the way our species has evolved: specifically, the ways in which we cooperate, use tools, and cook food have changed the pressures that affect us as a species. She takes us into the present day but does not—and I personally think this is a good thing in such a book—speculate too much about the future.

Though imperfect, I thought this was an important and readable book and would recommend it to anyone interested the brain or evolution.

This was originally posted on the Explaining the Future blog, but was moved because it should have been included here instead. We have kept the original posting date.